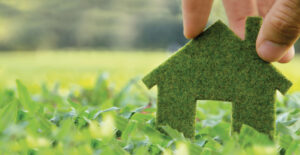 WASTE PAPER CONSTITUTES APPROXIMATELY 30% OF HOUSHOLD WASTE, IT CAN BE PROCESSED INTO THERMAL INSULATION MATERIAL, CELLULOSE, ON THE OTHER HAND, CAN BE REUSED IN ASPHALT PRODUCTION.

In building thermal insulation material obtained from processing of paper is known as ecowool. Repeated use of materials is especially important because of limited resources of our planet, it corresponds to sustainable environmental policy and is a responsible line of action to preserve environmental diversity for next generations.

A side effect of growing living standards is the rising amount of household and industrial waste, which is one of the causes of climate change. A landfill is a huge heap of waste we are trying to flatten with track-laying tractors. Birds are trying to snatch a morsel of food from it. However, a few metres under the surface chemical processes are taking place, as a result of which methane, one of the greenhouse gasses, is produced. Methane is produced by micro-organisms that occur in landfills because of biodegradable waste – paper too. Methane can be collected and used for production of heat for heating greenhouses and growing vegetables all year round. Methane can be burned in special plants to produce electricity for households, operate factories or transport. However, it is very costly and results in considerable carbon dioxide or CO2 emissions.

Degradation of waste is a very slow process, therefore, if the amount of waste disposed off in landfills will not decrease, new territories will be required for disposal of waste within a few decades.

Population of Latvia produces approximately 700 000 tons of household waste, which is around 428 kg of waste per person. 71% or 500 000 tons of it are disposed off in landfills. Environmental policy of the European Union (EU) provides that the amount of waste disposed off in landfills must be reduced to 10% until 2035, which is a difficult task for Latvia. The greatest amount of waste per one person is produced in Denmark – around 781 kg annually. As technologies are developing the concept of waste could soon disappear, because we have learned to use it and can safely refer to it as resources or raw materials.

INSULATION AGAINST COLD AND HEAT

Paper, which we for the most part see in sheets or rolls, can be turned into thermal insulation materials using modern technologies. Ecowool produced from recycled paper becomes more and more popular. Ecowool is chosen by people, who are not only wealthy, but who care for the health of our planet. So far thermal insulation materials helped to reduce heating costs during harsh winters. But as global warming continues a properly insulated home will also prevent overheating. This means lower expenses for electricity on hot summer days, when conditioners must be used.

Our ancestors already used plant fibres as insulation in buildings. In the second decade of the 20th century in Canada, shortly afterwards in Germany and USA too properties of cellulose or the main component of the plant cell wall were researched to establish, if it could be used as thermal and acoustic insulation material. In 1928 the first production plant of insulation materials from cellulose was opened in Germany. Later these insulation materials became popular, especially, in construction of private homes. At that time thermal insulation material was produced as a loose mass, and the first insulation blowing machine used to blow the material into the walls of buildings was a hand operated mechanical device.

After WWII, in 1950s, scale of construction increased, demand for good quality thermal insulation grew. Extensive research was undertaken about production of ecowool from other materials, including hemp fibre and a mixture of paper and hemp fibre. Application technology of materials improved, first machines came on the market operated by electricity or a diesel engine. Later the developers of the technology came to a conclusion that insulation of buildings can be made easier, if thermal insulation materials are produced in sheets of various thickness.

THERE ARE SUFFICIENT RAW MATERIALS

One of enterprises recycling paper in Latvia is SIA (limited liability company) Balticfloc, founded in 2010. In 2014 SIA Balticfloc launched recycling of waste paper into thermal insulation materials for buildings and production of cellulose for asphalt mixtures.

Ecowool is excellent for Latvian climate. The material is a loose, dry and light mass and consists of a mixture of 86% of reused cellulose fibre and 14% of natural salts. If rock wool thermal insulation is used in a building, it must be covered by an air diffusion film, ecowool does not require such an additional layer. Rock or glass wool dries slowly, from ecowool moisture evaporates quickly. The material is mould and fungi resistant, rodents do not like it and it does not cause any allergies in humans, therefore it is often used in schools and kindergartens.

One does not need to worry about raw materials ever being in short supply. There is enough newsprint paper, new waste paper acquisition channels from other countries are created. Waste paper could also be purchased from Latvian landfills, however, a paper sorting system that would promote the development of recycling has not been completely set up here in Latvia. The situation with waste fabrics is similar – thermal insulation materials could be produced from these raw materials too.

In 2017 SIA Balticfloc submitted an application for co-financing under LIFE_ PHIPP – LIFE17 ENV/LV/000335 programme to solve the problem with the use of non-recyclable, difficult to recycle or low quality waste paper in new products. Thermal insulation materials for buildings will be made by mixing ground paper with specially treated hemp fibre. Equipment for starting production has been purchased at the end of 2020.

The new thermal insulation material will be made in sheets and it will be easy to use for insulation of buildings as it will not require special machinery necessary for loose-fill ecowool. It is also very important that hemp is a material friendly to people and the environment, because during the processing of materials no CO2 is emitted. Consumption of energy for production of hemp fibre is seven to eight times lower than for production of the same amount of synthetic fibre. It is planned to obtain a certificate for the new product, so that it can be sold all over the world. Presently the furthest destinations, to which ecowool produced by SIA Balticfloc has been exported, are Iceland and Australia.

The most suitable hemp variety must be determined, from which to obtain fibre for production of ecowool. Hemp is a well known crop in Latvia. The specifics of harvesting must be taken into consideration so that it can be used for production of ecowool. In autumn hemp is flattened to ground, during winter the fibre separates from the stem, in spring the plants are lifted up, cut and collected. Afterwards it is processed using special equipment. As a result a fine fibre is obtained, which is mixed with ground waste paper, heated in an oven and thermal insulation sheets are produced in a special technological process.

The aim of the project is to create innovative insulation material for buildings from waste paper and hemp fibre demonstrating the economic and environmental advantages of its production and use. It is also important that hemp will be grown in Latvia making effective use of agricultural areas. It should be emphasized that all equipment for production of ecowool sheets has also been made in Latvia.

Article is published in issue BŪVIŽĒNIERIS (No.79) 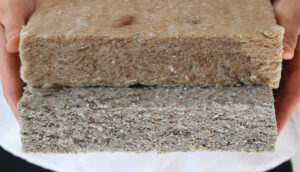