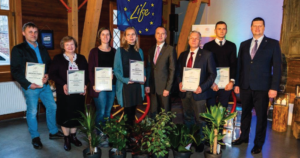 ON 22 NOVEMBER 2018, THE MINISTER OF ENVIRONMENTAL PROTECTION AND REGIONAL DEVELOPMENT KASPARS GERHARDS PRESENTED “LIFE AWARDS 2018” TO THE MOST SUCCESSFUL IMPLEMENTORS OF “LIFE” PROGRAMME PROJECTS IN LATVIA IN SIX NOMINATIONS.

“LIFE” programme is a European Union financial instrument in the field of environment and climate aimed at promoting, raising the issue, developing and implementing the EU environment and climate policy, co-funding projects with value added at the European scale. The overall budget of “LIFE” programme for the planning period from 2018 – 2020 is 1,657 million euros. Also national funding is available for implementation of projects approved by the EC. “LIFE” programme operates in Latvia since 2001, and 48 projects have been successfully implemented with its support.

“LIFE Award 2018” was awarded in six nominations. The University of Latvia won the award in the nomination – Project that has carried out territorially largest nature conservation activities. Project “LIFE Wetlands” – “Conservation and Management of Priority Wetland Habitats in Latvia”. The objective of the project is to implement the measures for wetland protection and renewal to ensure conservation and protection of important habitats in Latvia and the European Union.

The State Centre for Defence Military Objects and Procurement received the award in the nomination – Most publicly active project. The project “LIFE Birds in Ādaži” – “Improving of the conservation status of specially protected bird species in “Natura 2000” site “Ādaži””. The objective of the project was to restore heathland, forests and raised bog – nesting and feeding sites for the black grouse, which is a rare species in Europe, as well as nightjar, European roller, woodlark, tawny pipit, wood sandpiper and red-backed shrike – in the area of protected landscapes “Ādaži”.

The society “Baltic Environmental Forum” received a gratitude in the nomination – The most innovative project. The project “LIFE GRASSSERVICE” – Alternative use of biomass for maintenance of grassland biodiversity and ecosystem services. Within the framework of the project, biobutanol was studied, which is a liquid biofuel more similar to petrol than ethanol in terms of characteristics, and experimental studies were carried out for development of new technology, where the existing biobutanol production technology is adapted for using grass as a raw material.

The foundation “Latvian Fund for Nature” received an award in the nomination – The most ambitious project. The project “LIFE AQPOM” – “Conservation arrangements for lesser spotted eagle in Latvia”. During this project, one of the most extensive nesting field surveys of one bird species ever implemented in Latvia is carried out.