Industrial hemp or Cannabis sativa is an industrial crop with high-quality natural fibre, wood, and seeds. The Asian region of the Caspian Sea is considered the homeland of Cannabis sativa, but today it can be found in many parts of the world.

Industrial hemp can be grown almost anywhere in the world since it is able to grow in various agroclimatic conditions and has the excellent adaptive capability.

Hemp cultivation is environmentally friendly and does not require the use of fungicides, herbicides, or pesticides for growing. Besides, hemp cultivation prevents soil erosion, improves its structure, and promotes aeration. It is recognized as an excellent precursor plant for many crops which suppresses perennial weeds, and the leaves of the plant serve as a great natural soil fertilizer.

Hemp is one of the oldest crops used to make various products and materials. Already during the ancient Mesopotamian civilization (2500 BC), hemp fibre was widely used for making ropes and textiles.

Today, industrial hemp as a raw material is used in production and can replace various long-growing, hard-to-obtain and vanishing resources. Almost every product made from wood, cotton or oil can also be made from hemp.

The legendary Henry Ford even managed to make a car body that consisted of 70% hemp pulp.

Hemp sounds like a miracle plant that can feed, dress, treat humans, build houses, and its cultivation benefits the ecosystem by improving soil and absorbing the natural CO2. However, much of the world’s community looks at this outstanding plant with harsh condemnation.

The reason for this is quite simple. Hashish or marijuana is also made from hemp, and these are mainly used for intoxication. It is a narcotic substance, the use, distribution and cultivation of raw material (hemp) of which is banned in many parts of the world.

But it is rarely mentioned that Indian hemp is used and cultivated to make marijuana and not industrial hemp.

Industrial hemp (Cannabis sativa) and Indian hemp (Cannabis indica) both belong to the Cannabis genus. They are very similar in appearance and an inexperienced person may not even distinguish them from each other. But, despite the kinship and visual similarity, the properties and applications of these plants are different.

Both plants contain up to 150 biologically active substances. But only one of these substances – tetrahydrocannabinol (THC) – makes Indian hemp an evil twin. THC is a substance having psychotropic properties that affect the psyche, cause euphoria and can cause hallucinations.

Industrial hemp, on the other hand, contains no hallucinogenic substances and cannot intoxicate. It must be acknowledged though that it contains THC, its level is below 0.3%, while for Indian cannabis it is up to 25%.

In other words, it’s the same as comparing sour milk to wine.

In Latvia and most European countries, it is almost impossible to grow outdoors not only industrial hemp, but also Indian hemp with high THC levels. This requires specific climatic conditions that are simply not characteristic of the European region. 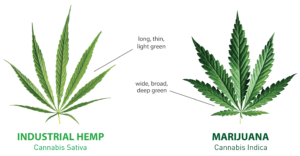 Hemp fibre is a great raw material for construction. Its production requires 7 to 8 times lower energy consumption than the production of the same amount of synthetic fibre.