The modern production model is largely based on the Linear economy, which aims to increase consumption and production quantities.

The principle of operation of linear economy is simple: produce – use – discard

Besides, the activities of the Linear Economy generate large amounts of waste, on both production and consumption side. It pollutes the environment and affects climate change.

Huge volumes of production and consumption of goods generate large amounts of waste, as a result waste management has become a problem with far-reaching negative consequences for the development of civilization.

As a solution, the transition from the Linear Economy Model to the Circular Economy Model is proposed. This would reduce the amount of generated and landfilled waste and, at the same time, would continue growth of the existing economy.

The circular economy is defined as a development model promoting sustainability, the essence of which is to keep the value of products, materials and resources in the economy for as long as possible, simultaneously reducing both the consumption of raw materials and amount of waste and the environmental impact. The circular economy marks the path to a systemic transformation of the national economy and society, the implementation of which requires the understanding and support of the general public, because the change of consumption culture is one of the most important driving forces in the development of the circular economy.

OBJECTIVES OF THE EUROPEAN UNION

The EC Communication of 2 December 2015 entitled “Closing the cycle: an EU action plan for the transition to a circular economy” included ambitious goals and measures mainly aimed at waste management solutions and covering the whole cycle from production and consumption to waste management and markets for secondary raw materials, it also offered proposals for amendments to waste management regulatory enactments. A number of directives were adopted within the framework of the action plan with new objectives. One of them provides that the share of landfilled domestic waste in the EU countries in 2035 will not be permitted to exceed 10% of the annual amount of domestic waste generated. In turn, the amount of waste generated must be kept to a minimum.

The circular economy model is relatively new and the transition to it requires entrepreneurs to change their approach to the production model, the choice of raw materials, the technologies used and the generation and management of waste.

Its objective is to adapt the entrepreneurship to a green future while strengthening the competitiveness.

Currently, the Circular Economy Action Plan is one of the key cornerstones for preventing generation of waste and ensuring the long-term and rational use of resources.

Responsiveness and direct involvement of not only entrepreneurs, but also consumers is very important for full implementation and development of the Circular Economy model. It can only be fully implemented if the consumer purchases environmentally friendly products and sorts domestic waste so that it can be recycled.

There would be no point in using recyclable waste as a raw material in production if its availability were limited. And vice versa, there’s no point to sort waste if it is not possible to recycle it. 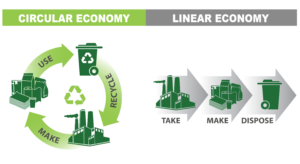 PRINCIPLES OF THE CIRCULAR ECONOMY MODEL

So what exactly is a circular economy model?

Its principle includes reuse, recovery and recycling of resources, so that the used resources are used for as long as possible before they become waste that can only be landfilled. It allows to extend the life cycle of materials, curbing the need for natural resources.

The operating principle of the circular economy is: produce – use – recycle

The main objective of the circular economy is to reduce the amount of waste generated by ensuring that materials and products are used for as long as possible and by promoting their recycling and recovery.

The circular economy must prevent the landfilling of valuable resources, encourage the re-use of resources and prevent the generation of new waste. This protects the environment, reduces the consumption of natural resources, promotes competitiveness, innovation and economic growth.

Product design development is the very first stage in the product life cycle, which plays a significant role in ensuring the principles of the circular economy. The product must be sustainable, recyclable and the production process must be environmentally friendly.

According to EuRIC 2018 data, approximately 56.6 million tonnes of recyclable waste paper was collected in Europe, which is about 70% of all paper waste generated in the European Union countries.

Besides, according to CEPI data, 16% of waste paper collected in Europe were exported for recycling outside the European Union countries. There are several reasons for this. But one of the reasons is that there are not enough production companies in Europe that use waste paper as a raw material for manufacturing new products.

The Balticfloc LIFE_PHIPP project is directly involved in the processes of promoting the Circular Economy.

The main objective of the project is to produce an innovative thermal insulation material, the production of which would recycle difficult-to-recycle waste paper (low quality waste paper) together with high-quality hemp fibre.

As a result of the project implementation, the amount of landfilled waste paper will be reduced, as well as the re-use of the difficult-to-recycle waste paper in production will be addressed. 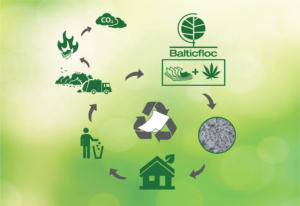